the Sea maybe (pl, może Morze) – from longing for nature; made up especially for those who have limited access to the sea on a daily basis, the ones doomed to the city noise and strained peace of life.

Accidental meetings, conversations, various places, sounds, nature’s impact on people – it’s plenty of inspirations… I had been living by the sea for a while. Very often after finishing work I had been running to the seashore with a book in hand. I was taking a rest in the rhythm of the sea waes resounding. Not once I fell asleep beeing incredibly relaxed. I live in the inland city on a daily basis, but I am not into noisy and bustling way of life, excess of exhausting stimuli from everywhere.

There is no doubt that the subtle sounds of nature have beneficial effect on the human psyche – as confirmed by studies of English scientists, based on brain’s fMRI, heart’s rate monitoring and behavioral experiments. However, the impact of sounds generated acoustically and digitally differs. That was basically an impulse to the ‘może Morze’ (eng.: ‘the Sea maybe’) project creation – from the idea to the prototype’s implementation of my authorship. 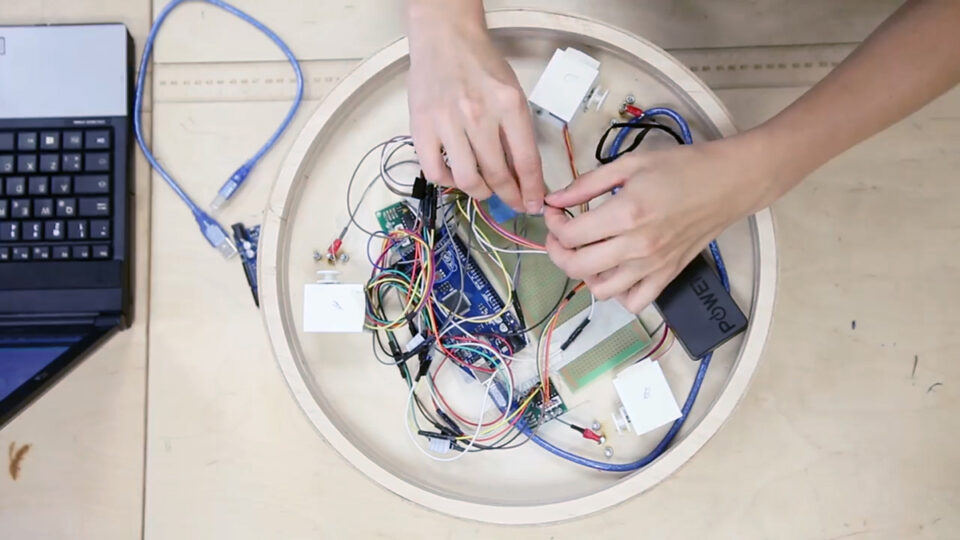 By means of an electronic system I set in motion the instrument, what causes the tumbling of metal balls over the membrane. It generates acoustic sounds reminiscent of the sea waves’s. Everything enclosed in a simply designed wooden form, that remains significant for the sound as well. Due to its meditative sound, the invention could become a tool helpful in relaxation (eg. for stressed or highly sensitive people, ones having sleep disorders or tinnitus).

For substantive support and preparation in using of new technologies for artistic projects, many thanks to the team of Robisz.to Association and FabLab powered by Orange (Warsaw).